The adventures of Jeffery the Gull

So, what do you think? I spotted this shiny medallion with my new set of binoculars.
There was this muscle guy over on the Park Point beach wearing it.  I knew it would be hard to get it off his neck, so, I waited until he and his girlfriend laid down on their beach towels. It was hot so he took it off and put it in one of his sandals.  I very slowly snuck up behind them.  I don't think he recognized me with my sunglasses on.

At the right moment, a kicked over his drink and in the disturbance, I was able to grab this really cool shiny thing. It was so neat. As I flew a 360 circle around the couple, he threw a sandal at me -- so much fun, I love shiny things and life in Duluth.

Have a great day! - Jeffery the Gull 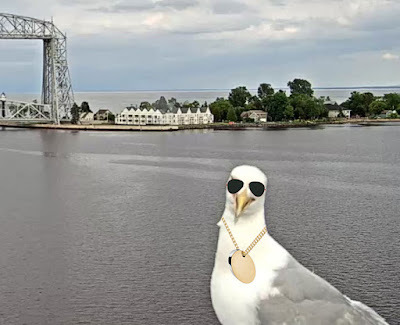 Posted by duluthharborcam at 6:49 AM

Email ThisBlogThis!Share to TwitterShare to FacebookShare to Pinterest
Labels: Jeffery