When viewing the canal cam, you may wonder about the tugboat that is on display in the Marine Museum grounds.

The tug BAYFIELD did much of its work here in Duluth-Superior Harbor for the US Army Corps of Engineers. Its main job was pushing crane barges with dredging equipment mounted on deck, deck barges loaded with rock or scows filled with dredged material. 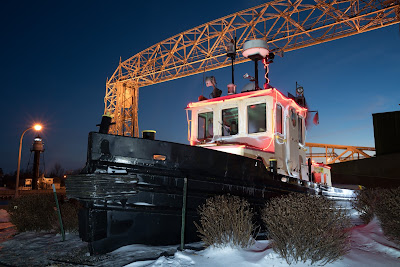 The tug BAYFIELD was built in 1953 by Roamer Boat Company in Holland, Michigan. She measures 45 feet in length and 13 feet in width. The BAYFIELD is powered by a 170 horsepower diesel engine.  The BAYFIELD was retired from active service in 1995 and placed on permanent display here in Canal Park in 1999.
Posted by duluthharborcam at 7:57 PM