If you happened to be watching the Canal Cam about noon today, you may have noticed a small group of people standing in front of a plaque on the pier break wall. 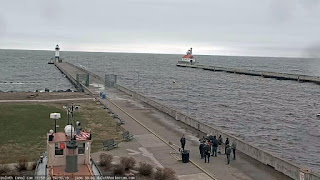 The plaque was placed there in honor of Ed Culbertson, a Coast Guardsman who gave his life, 52 years ago, trying to save three young brothers who became trapped on the pier during a fierce storm.

Capt. Tom Mackay, talked about his friend Ed, who perished that night and reminded the news media of the bravery and valor that is often forgotten over time. Tom wanted to make sure Ed will be remembered.

The words on the plaque read:
EDGAR A CULBERTSON
BM1
THIS PLAQUE IS DEDICATED BY THE PEOPLE OF DULUTH TO THE MEMORY OF A FELLOW CITIZEN, COAST GUARD BOATSWAINS MATE FIRST CLASS, EDGAR A. CULBERTSON, WHO ON THE NIGHT OF APRIL 30TH 1967 GAVE HIS LIFE ATTEMPTING TO RESCUE THREE TEEN-AGE BROTHERS STRANDED ON THIS PIER DURING A SEVERE STORM, HIS GREAT SACRIFICE IS AN ENDURING EXAMPLE OF HIS DEVOTION TO DUTY AND COMPASSION FOR HIS FELLOW MAN.


Posted by duluthharborcam at 3:28 PM