You may have noticed on the harborcams a lonely looking pilothouse located on the end of the Duluth Timber Pier near Pier B.
(the following information was provided by Capt. Tom Mackay and Capt. Edward Montgomery) 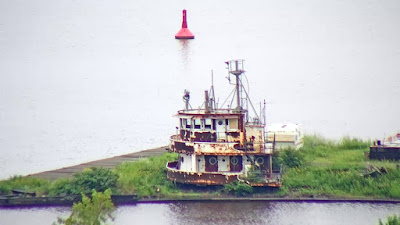 The IRVIN L. CLYMER was built in 1917 at the American Ship Building Company in Lorain, Ohio. She had a crew of 16. She was 552 feet long with a 60 ft. beam and a 32 ft. draft. Launched as the self-unloader CARL D. BRADLEY (1) for the Great Lakes Fleet, she made her maiden voyage from Lorain Ohio to Calcite MI on June 10, 1917 for a load of stone. She sailed under that name until 1927 when she was renamed JOHN G. MUNSON (1). In 1951 she was again renamed, IRVIN L. CLYMER. She was scrapped at Azcon in Duluth in 1994, when the pilothouse was salvaged by a private party and unloaded at the end of the Duluth Timber Pier where it sits today. Duluth was the Clymer’s home port for many years and had a nickname of the "Whiner Clymer"

Posted by duluthharborcam at 8:56 AM