Yesterday I made it over to the Apostle Island Ice Caves on a sunny February afternoon.
The beauty of the caves never ceases to amaze me. God has crafted the Apostles in an incredible way and it is indeed humbling to visit the caves in winter or summer.
****You can visit my online gallery of the 2015 caves by clicking HERE.
****You can take a 360 degree view of the inside by clicking HERE

I hope you enjoy the scenery as much as I did!


Every morning on Lake Superior brings a fresh view and this mornings ice shards at Brighton Beach in Duluth were exceptionally beautiful.


The Duluth Shipping Canal looks a bit different from 100ft and although the little photocopter doesn't have a very good camera for night photography, it's useful to get a different perspective on things.

Essayons - A once great Tug!!

I took a walk out to the old Essayons this afternoon to see what it looked like close up.

Much like going to a graveyard, the once great tug sits on the bottom of the bay, unnoticed nearly buried in the February snow drifts.

The pride of the fleet, the Essayons was the historic retired Army Corps of Engineers tugboat that had been a Twin Ports fixture since 1908. The tug's engine is on display at the Marine Museum in Canal Park.

The tug's owner was hoping to turn the boat into a floating bed and breakfast. However, vandal damage postponed the plan in 2004 and the tug was than docked near the Duluth Timber Company.

In 2009, shifting harbor ice pushed by a strong northeast wind, punctured the hull and the boat sank the the bottom, where it still rests today.

Perhaps someday it will be raised, but, for now, it quietly rests in peace, out of sight, and unnoticed.

"ESSAYONS" means - "Let Us Try" and is the branch song of the Army Corps of Engineers.


Essayons, sound out the battle cry
Essayons, we'll win or we'll die
Essayons, there's nothing we won't try
We're the U.S. Army Corps of Engineers
Pin the castle on my collar
I've done my training for the team
You can call me an engineer soldier
The warrior spirit has been my dream
We are builders, we are fighters
We are destroyers just as well
There've been doubters who met with the sappers
1 - We know our sappers will never fail
OR
2 - And then we blew them all straight to hell
Our brothers fighting on the battlefield
Look to us to point the way
We get there first and then we take the risks
To build the roads and the air strips
And bridge the mighty river streams
We don't care who gets the glory
We're sure of one thing, this we know
Somewhere out there an engineer soldier
Designed the plan for the whole darn show
Essayons whether in war or peace
We will bear our red and our white
Essayons we serve America
And the U.S. Army Corps of engineers
Essayons! Essayons!
duluthharborcam at 2:06 PM 12 comments:
Share


Just a reminder that summer is right around the corner!


Just another "Duluth" snowflake that I photographed last Friday.


Ice fishermen struggle to get their sleds through the chunks of shore ice at Duluth's Brighton Beach.

Uncle Harvey's Mausoleum - Northlanders out for a sunny February afternoon stroll on the Lakewalk Saturday did a little exploration along the shoreline.

As you can see in this photo, the support structure that the two swimmers are on in the summertime photo below, collapsed into the lake sometime this February.

Hard to believe that in another month, the daylight hours of light will be the same as nighttime hours of darkness. 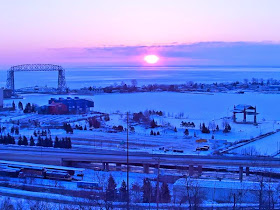 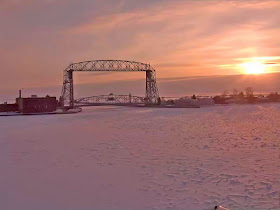 “It was You who set all the boundaries of the earth; You made both summer and winter.” ~Psalm 74:17
duluthharborcam at 7:44 AM 3 comments:
Share


A few weeks ago, a strong storm pushed up piles of ice along the Park Point Beach. These 20 foot piles of ice provide a perfect place to photography the bridge from a different perspective.


With all of the water "Hard" for the time being, the sailboats seem to be quietly biding their time, waiting for summer.

CGC Alder prepares for the season


With shipping season only a few weeks away, the CGC Alder is being prepared for another icy challenge.

Lake Superior has quickly become ice covered in recent weeks and although it is not as thick as last year, the coverage area is getting close at 91.4 % today.  No wonder the Ice Fishermen are happy.

Sunrise fishing on the Big Lake


With the boats still frozen in, fishermen are heading out on Lake Superior at daybreak to try try for the "Big One". This morning was -20F and there was no complaints about the cold, only an appreciation for the beauty.

All cameras should be back in service.
duluthharborcam at 4:22 PM No comments:
Share


The sunrise is now moving north, proclaiming that winter is almost over, despite the -50 windchill. Enjoy the cold while it lasts! 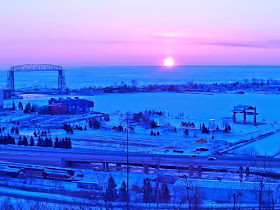 Error Message in Internet Explorer --- a long running script has prevented this page from loading!

Some I.E. users are getting a "long running script error"
"Long running script" error messages are specific to Internet Explorer. These  messages are generally intended for developers who are testing and building a   website You should be able to get rid of them by disabling certain browser settings:

11:30 AM 2/17/2014 - The two Visitor Center cameras (Canal Cam and Bridge Cam) remain down due to an internet connection issue.  I will be meeting a cable technician  Wednesday afternoon to try and resolve the problem.

I will keep you posted.

If anyone using Internet Explorer browser continues to have problems with error loading messages on thos page, please comment to this post.  I have changed some page scripting that may help. Even though I don't really know what I am doing.


FYI, there are some folks having trouble accessing this page due to some programming code.

In an effort to troubleshoot this issue, I have temporarily removed the thumbnail links on the right column.

Note that all of the cameras are still accessible through the camera text links on the right column.

I will continue to work on this issue and hope it is not too much of an inconvenience.

Hopefully I will have the bugs worked out by opening shipping in a few weeks.

Ice fishing on the Big Lake.

Now that the ice on Lake Superior is thickening up--Ice Fishermen are venturing out onto the big lake for the "Big Catch".
I sent the little photocopter up to take a quick look around. The fishermen are congregating off 21st Ave East, at least until the ice get's thicker further up the shore.

The two cameras at the Maritime Visitor Center are off line due to an internet connection issue.  Because of the Presidents Day Holiday, I won't be able to get the cameras going until Tuesday.

In case you didn't get any roses today!

After 40 years of service, the USS Duluth was retired and it's anchor has a fitting resting place between two other memorials on Duluth's Lakewalk. The anchor weighs 12 tons.

Already February - Spring is right around the corner.
Snapshot 2/2/2015 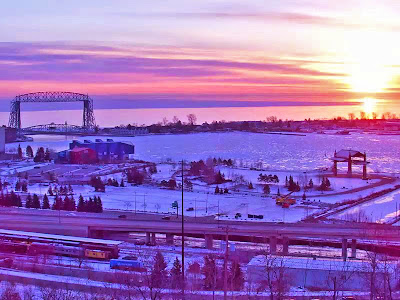