American Mariner arrived in Duluth this afternoon to load grain.
Posted by duluthharborcam at 3:28 PM 2 comments:

Arthur M Anderson was the first inbound commercial ship of the season.
Posted by duluthharborcam at 1:17 PM 3 comments:

CGC Spar arrive in its new homeport this morning during springtime snow showers. (Welcome Home CGC Spar)
Posted by duluthharborcam at 10:45 AM 3 comments:

The Situation in Whitefish Bay - by Eric Holst

The Situation in Whitefish Bay

There could very well be a 12' deep ridge of wind-rowed ice out at the edge of the ice field. Wind-rowed brash ice can pile up even deeper than that in certain situations One such situation would be exactly what we've got at the boundary between Whitefish Bay and the larger expanse of Lake Superior: the edge of a thick ice field that's had all winter to establish itself, which is then subjected to a long time period of sustained large wave action beating against its outer edge, along with sustained wind blowing from the open water against the ice toward the bracing shoreline behind it.

That's not to say that there's somehow 12' of ice in the specific location where the up-bound ships have been lined up and waiting. They intentionally chose to heave-to and wait in the part of the ice field that's likely to remain "fast" (i.e. stable) plate ice throughout the wind/wave event of the last few days. It's also not the authorities' fault that the ships have been delayed, it's weather.

Copy & paste from an explanation I wrote up elsewhere online earlier today, which might be preaching to the choir, but might also provide some background:

Even today (March 28th) after winds have dropped below gale force, relatively robust northwesterly winds are still putting immense pressure on the field of ice in Whitefish Bay. Under those conditions it's not easy or wise for ships to try to move up-bound / against the wind / against the wind-driven pressure on the field of ice, especially if those up-bound ships are traveling empty. The ice at the edge of the field, after several days of strong on-shore (northwesterly) winds and waves like we've seen in recent days, can be transformed from thick, wide, stable plates of ice into "brash ice" - a chaotic jumble of huge chunks of ice that have been tossed by waves, broken up, rolled around, re-fused, and pushed on top of itself until the wind-rowed "ridge" of brash ice at the fringes of the field can be stacked ten, twenty, or even thirty feet deep -under- the water, like ice cubes stacking down into a glass of water as more ice cubes get added to the top of the drink. If an empty ship, riding relatively high in the water, tries to fight that brash ice while it's still actively under wind pressure (in this case, northwest winds are blowing from the direction that does the trick in Whitefish Bay), said empty ship could end up with ice underneath her and get very, very stuck.

So what the up-bound ships and the icebreakers have been doing over the past few days is very wisely waiting for the winds to abate/change direction. They're waiting in a good spot - further back/south from the edge of Whitefish Bay, where the ice is still more in big stable plate form and easier/safer to hold position in. What seems to be unfolding now is that several down-bound loaded ships have arrived near the edge of the ice field. They have likely begun to encounter brash ice at the edge of the field and proceeded until they can no longer make progress through the ice. Where you see them now is not where they have gone to anchor, but where they have come to a stop in the ice. Seems as though the icebreakers are attempting to escort those down-bound ships through the ice first. There are a number of advantages to that strategy given the current situation. Loaded ships sit deeper in the water and have a better chance of handling thick, deep accumulations of brash ice. These ships are traveling in the same direction the wind is currently blowing, which might make it easier for them to fight their way through the worst of the brash ice zones at the edge of the ice field. The first two loaded/downbound ships also happen to be the two freighters with more horsepower than any other ships on the Lakes - the Edwin H. Gott and Edgar B. Speer. Those ship's horsepower make them some of the best candidates for freighters that can handle heavy ice conditions. That, combined with the fact that they're loaded and traveling with the winds, makes them a better "bet" for icebreakers to work with first, while the northwest winds and cold temperatures are still making conditions challenging.

A change in wind direction can make for a world of difference in whether or not ships can navigate a field of ice, especially in areas where previous winds and waves from the opposite direction have formed thick ridges/zones of deeply-stacked brash ice chunks. Warmer weather doesn't hurt either. At Whitefish Bay, both a warm-up in air temps. and a change in winds to a nearly opposite direction from past few days' wind event are forecast to begin developing on Tuesday. Sometimes within minutes or just a few hours of the moment that shoreward wind pressure is removed from an ice field, and winds either calm or switch to an off-shore directions, ships are suddenly able to transit the recently formidable ice with relative ease, especially when there are escort icebreakers around. If the wind switch indeed unfolds tomorrow (Tuesday, March 29th) as forecast, the up-bound convoy would likely be able to get moving.

Other previously mentioned factors have also figured in the Coast Guard icebreakers' decision-making process over the last few days. Unseasonably cold temperatures and visibility reduction from wind-driven snow have also made conditions more challenging and added to the stack of factors that led to the Coast Guard having the up-bound convoy sit tight. Such situations are relatively common early and late in the shipping season on the Great Lakes. What's new is that we're gaining an increasingly to-the-minute, detailed, up-close view of such a situation as it unfolds, and more and more people are gaining the ability to ask questions about what's going on. With the proliferation of social media information and opportunities for commentary and interaction comes an impetus to spread good information and encourage interest from the general public based on accurate information and positive engagement!

Posted by duluthharborcam at 8:16 AM 9 comments:

The 1000 Ft Burns Harbor pushed through broken up harbor ice to sound a Master Salute as the first commercial boat departure from Duluth this season.
Posted by duluthharborcam at 1:58 PM 2 comments:

The 1000ft Edwin H Gott departed and was replaced with the 1000 ft Edgar B Speer in Two harbors this afternoon.
Posted by duluthharborcam at 7:25 PM 1 comment:

The 1000 Ft Burns Harbor pushed it way through the turning basin ice field as it backed its way into the CN or docks for loading iron ore pellets in the first load of the season.
Posted by duluthharborcam at 5:58 PM 2 comments: 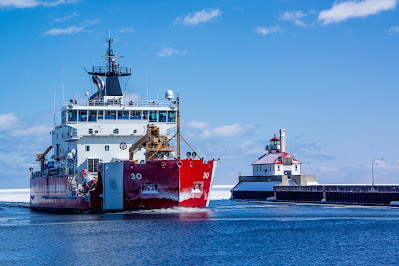 Ice cutters will be here by the end of this week and the big boats probably next week.
Posted by duluthharborcam at 4:38 PM 7 comments:

As we enter a new season with fifteen cameras to view, my hope is that everyone will be able to have a window to the harbor that is better than ever.  My plan is to upgrade each camera every five years which means an upgrade of three cameras a year.

In 2022, we have replaced the Wisconsin Point Cam (still waiting for power to be restored) and installed the AMI Connors Point Cam.  I plan on upgrading two more cameras this year, the Great Lakes Aquarium cam (GLA) and Two Harbors Depot as these are now the oldest on the system.  GLA cam is scheduled for June and Two Harbors after that.

Of course, there will always be breakdowns and failures, but, with the 5-year upgrade cycle, I hope to stay ahead of most unplanned trouble.

Posted by duluthharborcam at 9:18 AM 17 comments:

Email ThisBlogThis!Share to TwitterShare to FacebookShare to Pinterest
Labels: Harborcams

Boats are being prepared now for the upcoming season. The boats will be moving in a few weeks. 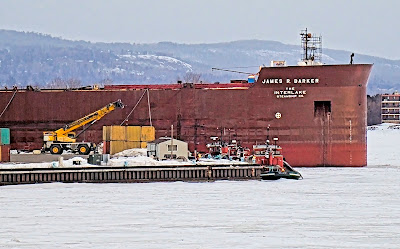 Posted by duluthharborcam at 6:49 AM 2 comments:

Email ThisBlogThis!Share to TwitterShare to FacebookShare to Pinterest
Labels: dhc-snaps

Open water, sweeping clouds and changing colors of another day on Lake Superior. 90 minutes of the breaking day packed into a few minutes.
Posted by duluthharborcam at 10:18 AM 1 comment:

In a particularly colorful sunrise, the colors rolled though the sky like a waving banner.
Posted by duluthharborcam at 10:45 AM 2 comments:

Listed below are some of our friends that share the harbor.

The fundraiser for the new Western Harborcam is complete. Thank You, Thank You! I will keep you updated as to progress. Expect the new camera by April 1st. -- Den